You can be a part of the lifesaving work of the OutPaws’ Sweet Home Sanctuary.  By sponsoring an animal, you help provide food, shelter and medical care.  You also make it possible for us to take on and save more residents.  When we know we have sponsorships set up for each animal, then we can guarantee we have the funds necessary to save another life.  We receive rescue pleas from across the country. We also receive surrender requests from pet owners due to illness or financial hardship.

By sponsoring an animal, you give that animal a second chance at a life free of cruelty, neglect and abuse.  You guarantee that animal a forever home with love and companionship.

During checkout, please indicate in the message field the name of the animal you would like to sponsor. 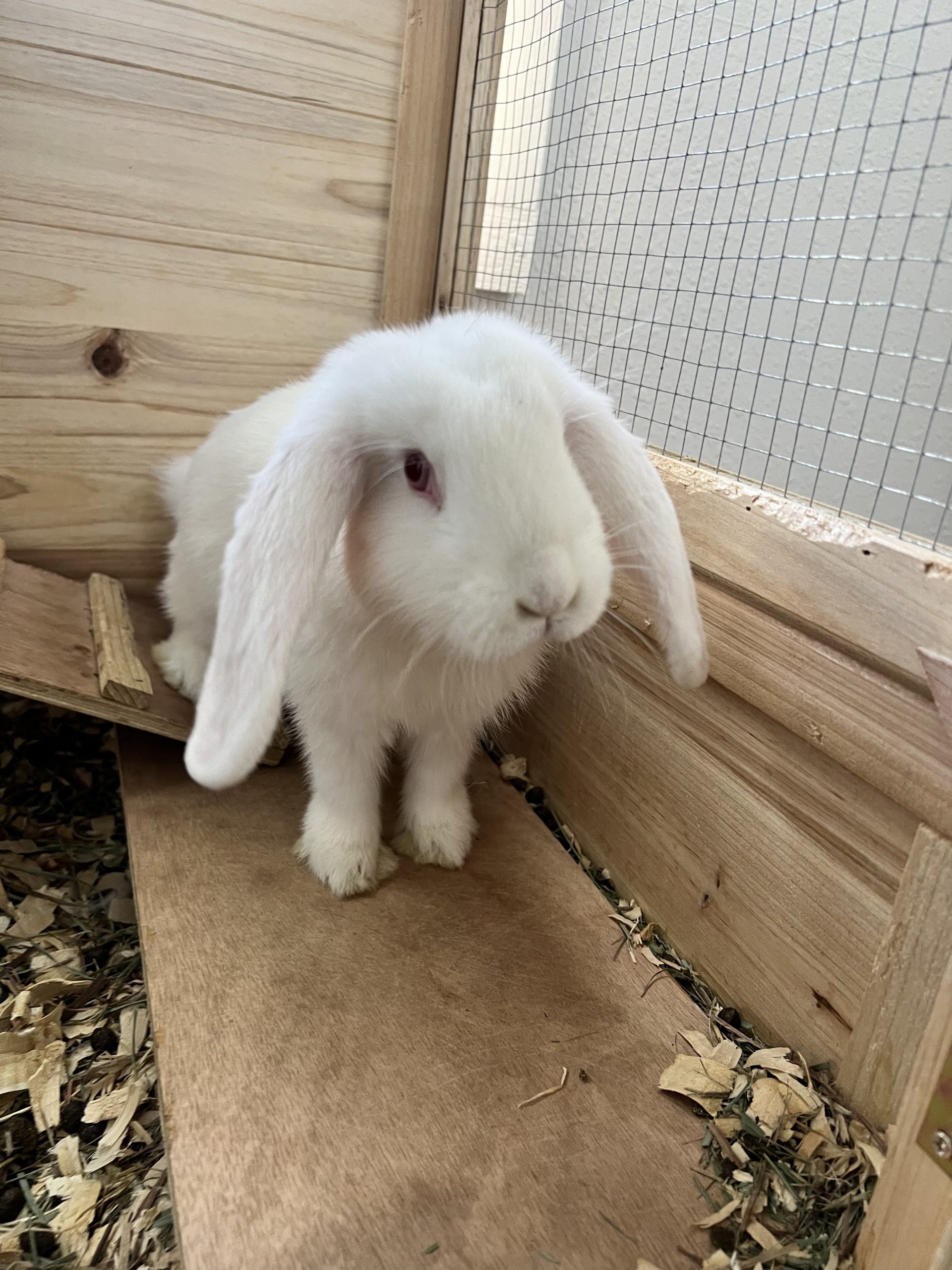 Chandler and his siblings, Phoebe and Joey, were being advertised on a Facebook group as “free meat rabbits.” At the time, they were only 10 weeks old and just as adorable as could be. They are half lopeared rabbit and half New Zealand rabbit. Unfortunately with current inflation, vet prices have gone up considerably. Vaccines to protect Chandler and his siblings from Rabbit Hemorrhagic Disease (RHD) were $160 and spay and neuter surgery will be $400 per bunny. Would you sponsor Chandler, Joey or Phoebe to help cover their medical expenses? 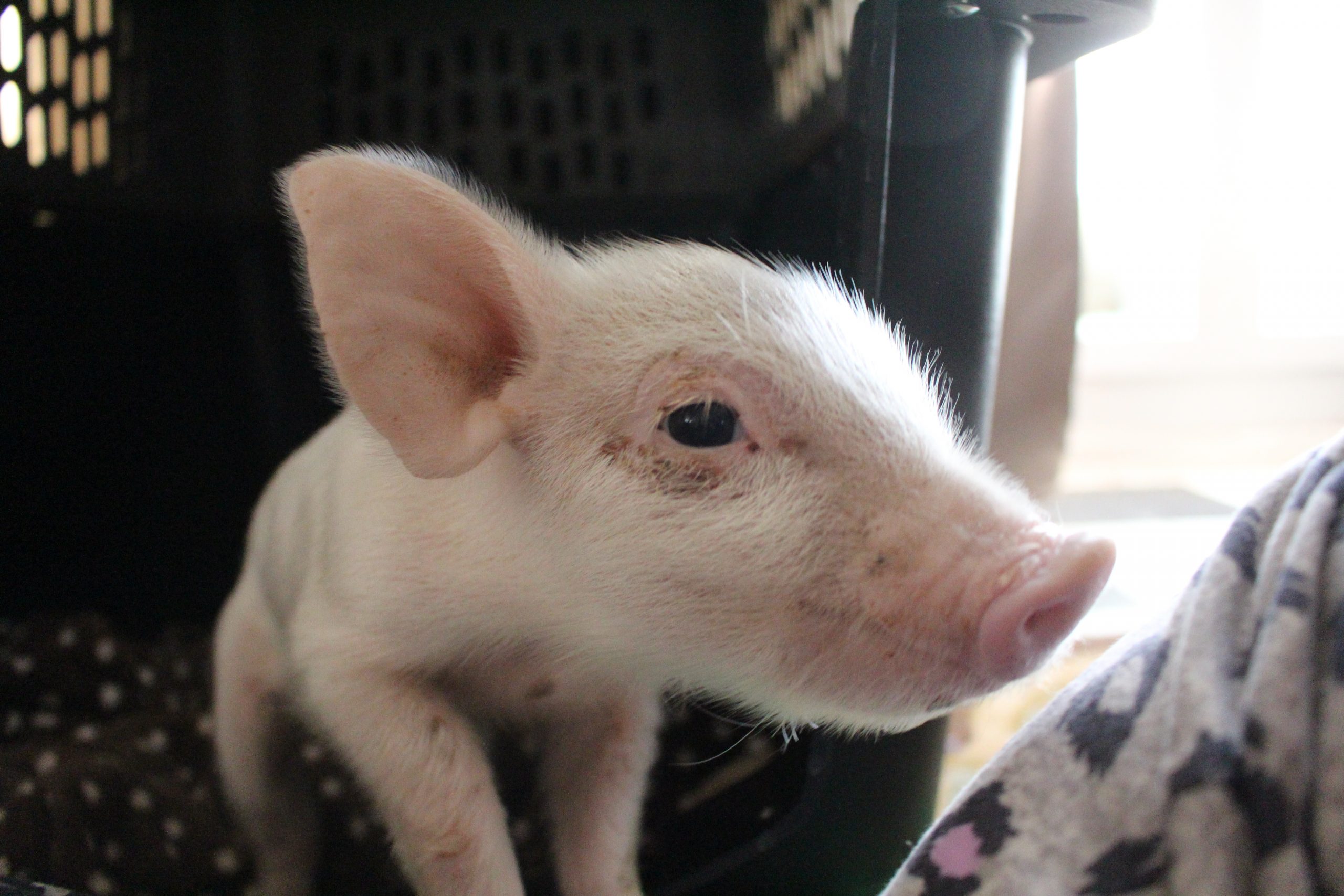 Huck is a tiny piglet who fell off a semi-truck in Nebraska and was rescued by a Good Samaritan. Piglets at factory farms are taken from their moms when they are just 3-4 weeks old. Males are castrated and their tails are cut off with no anesthesia or pain meds. They are then packed onto a truck and taken to another farm to be raised until slaughter at about only 6 months of age. Something within tiny Huck gave him the courage to jump from the truck and run for his life. This little fighter is affectionate, silly, and smart. He is growing up with love and the companionship of other species at the OutPaws’ Sweet Home Sanctuary. Still a baby, he’s still eating milk and slowly learning to eat small amounts of feed. Huck will need his own house and fencing once he has outgrown his crate and playpen in the house. Would you sponsor Huck Finn’s future and reward this tiny boy for his brave heart? 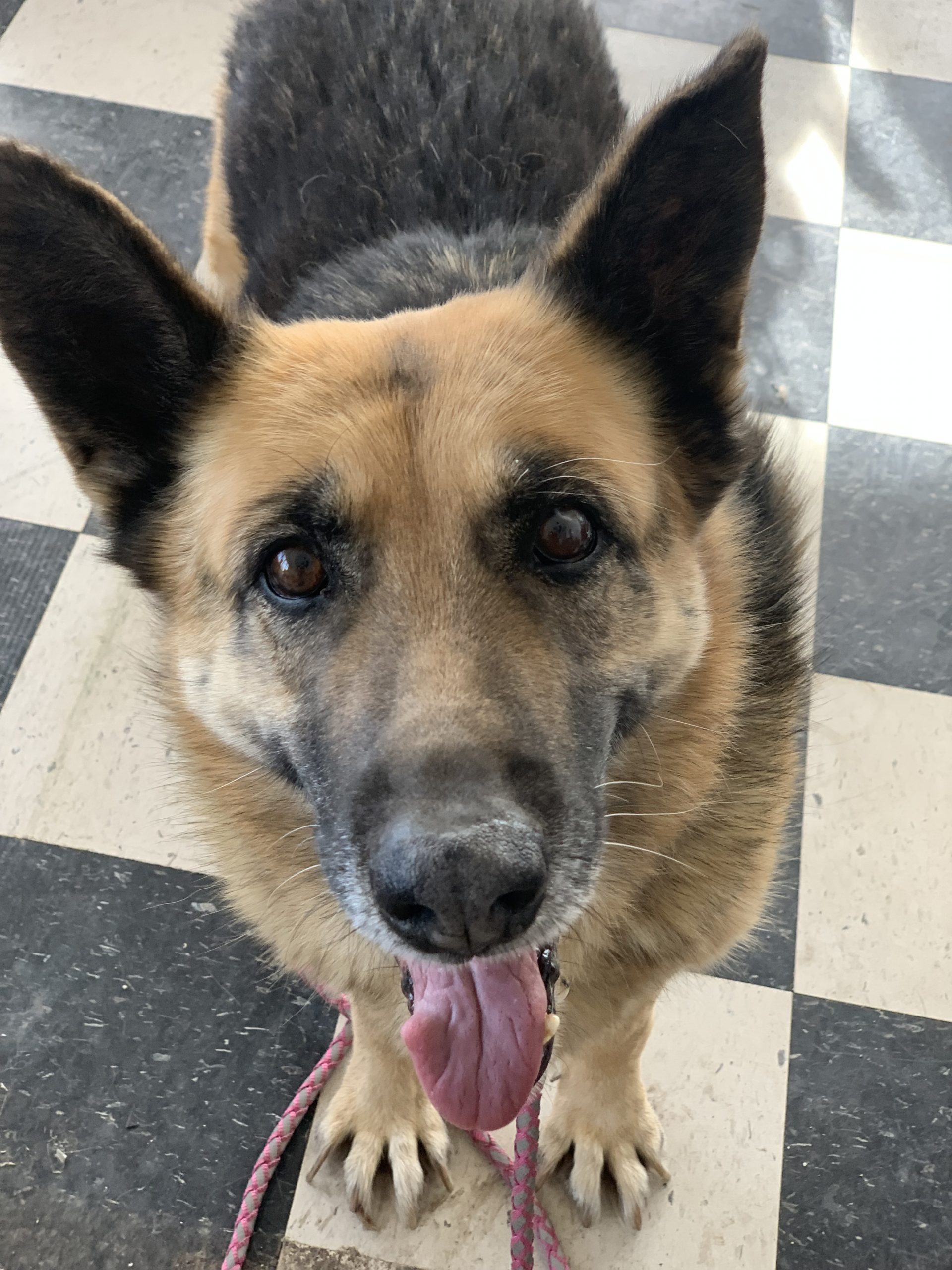 Katie is a senior German Shepherd who wound up in a New Mexico shelter when her owner died and no family stepped up to take her. She joined the Sweet Home Sanctuary in January 2022 and will spend her golden years as a farm dog. She’s an active senior and loves to run and play with the other dogs. She does have a condition called panus in one eye that requires daily eye drops and she get supplements for joint stiffness. Put her name in the notes if you would like to sponsor the forever life of this beauty. 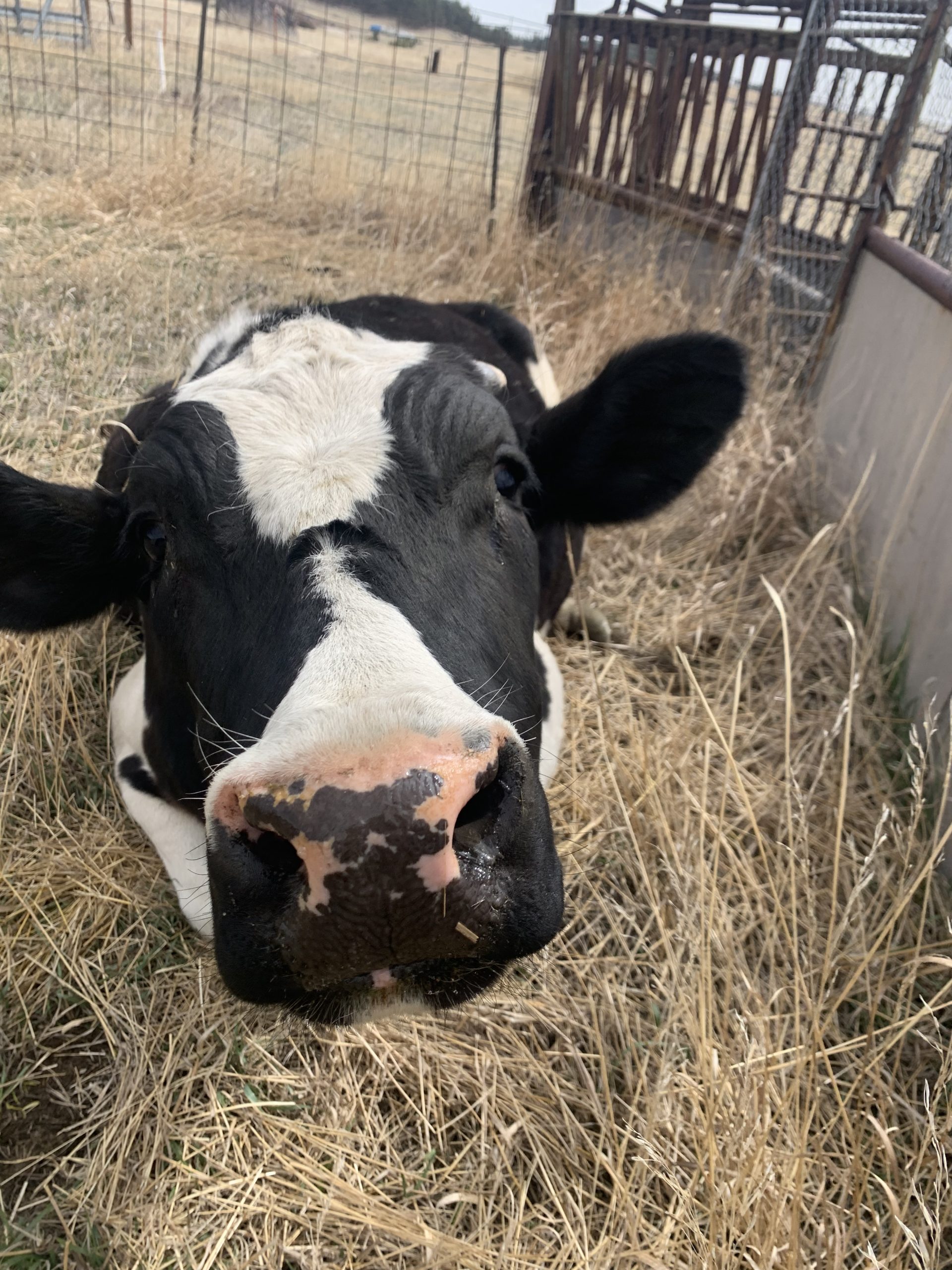 Milkshake is a “people cow.”  This handsome 2 year old steer was purchased as a baby in Montana and kept in a small backyard as he was being raised for slaughter.  An actor on location in Montana was staying at a nearby hotel and met Milkshake on his daily walks. As he began to form a relationship with Milkshake, he was determined that Milkshake should not be slaughtered and started a Go Fund Me to save him.  After Milkshake’s life was bought for a price, the actor and his co-workers set out to find a forever home for him.  A kind lady in Montana volunteered to take him and she and her daughter raised him from a calf to 2 years.  At that time, she realized he needed more space to roam and some bovine friends so she drove him all the way from Montana to Colorado so he can live out his life at the Sweet Home Sanctuary.  Milkshake loves to entertain volunteers while they work on the farm and enjoys pets and grooming.  He weighs about 2,000 lbs so he is an expensive boy to feed and maintain.  Would you sponsor Milkshake and his forever life free from slaughter? 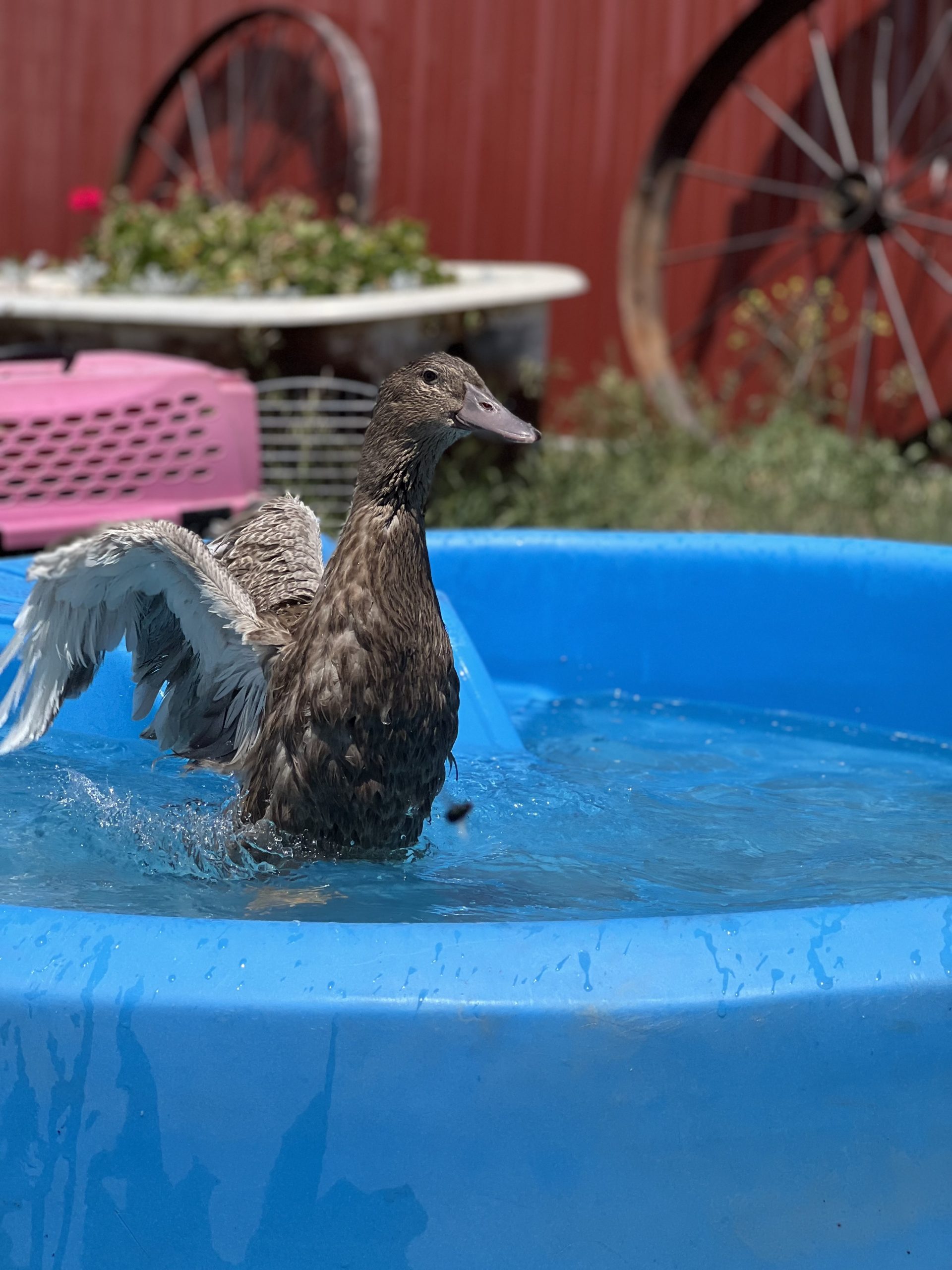 Moxie is a teenaged duckling who was discarded a few weeks after hatching. Sadly, ducklings and chicks are sold at feed stores and purchased as a whim purchase by customers who play with them for a few weeks, then decide they are bored and discard them. Moxie and her brother Marvel were dumped inside a rescuer’s fenced yard. She brought them to safety and began the search for a forever home. We were able to make room for these two in our flock and she has been growing up indoors with dips in the bath tub for fun. Soon, our flock of young duckling will make the move to their outdoor coop and run. Moxie and her flock need sponsors to provide their feed, habitat and medical care. 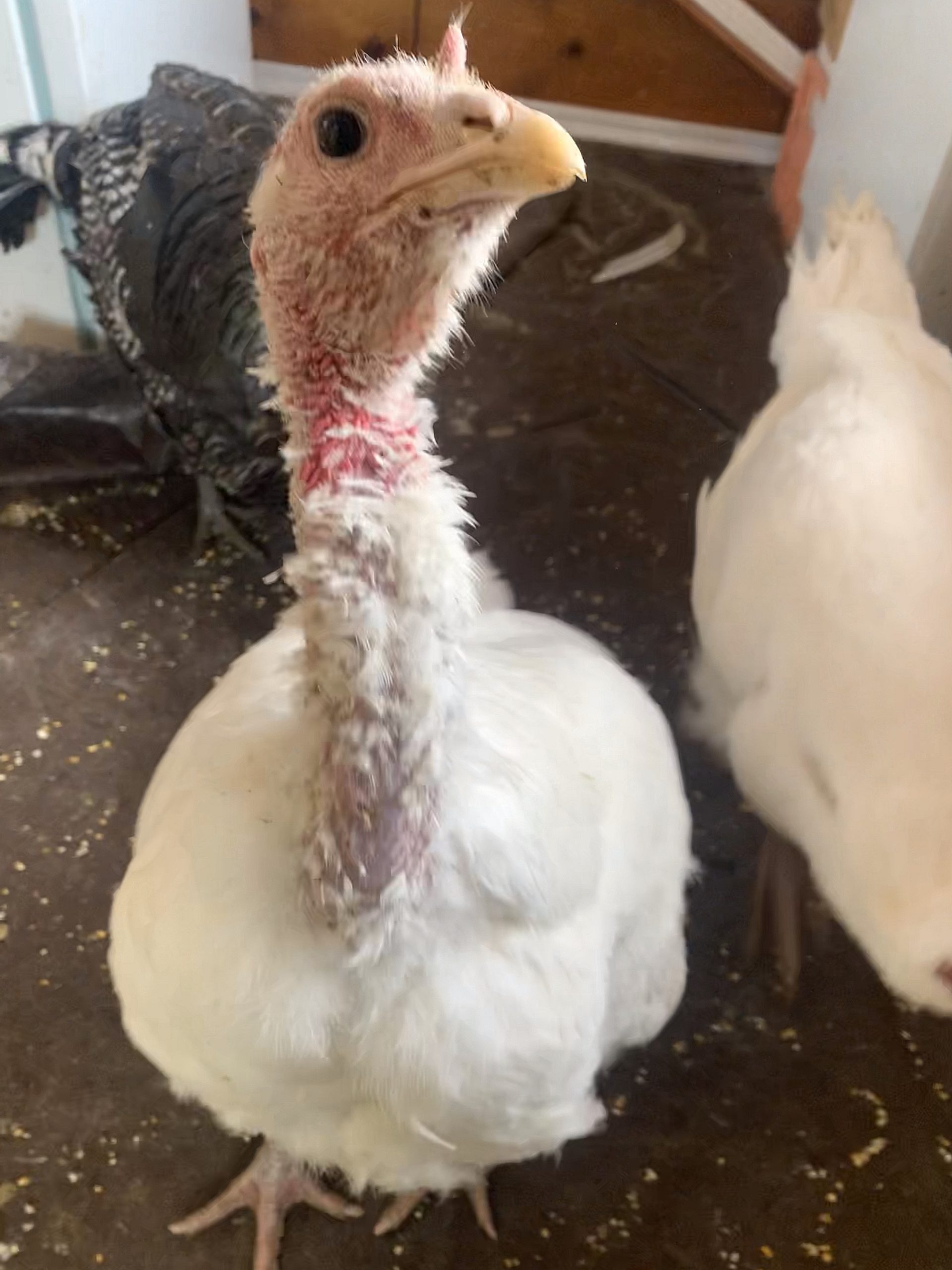 Sweet Potato was rescued from becoming Thanksgiving dinner in November 2021. She and her sisters, Green Bean and Punkin Pie, were only 7 months old but scheduled to be slaughtered. Sweet Potato now enjoys a life safe from slaughter. She looks forward to returning to an outside predator-free run with a nightime chicken coop now that the Avian Influenza that spread across the U.S. in the first half of 2022 seems to be resolving. Sweet Potato enjoys all flock pellets as well as snacks of fresh vegetables and fruits. Will you sponsor this gorgeous turkey hen and provide for her life as a permanently pardoned turkey?